Florence , the capital of Tuscany is one of the best known and best loved cities of the world. Full of artistic treasures and architectural masterpieces, the city attracts huge numbers of visitors each year.
Florence (also known as Firenze) is famous for being at the heart of the renaissance period and the home of fine arts and literature. The Uffizi gallery is an absolute treasure and must be visited whilst in this magnificent city.

Here you will find the sculpture of David by Michelangelo, or perhaps the romantic Ponte Vecchio, or Giotto's bell tower, but Florence could also be represented by famous people such as Leonardo Da Vinci, Michelangelo or Dante Alighieri. 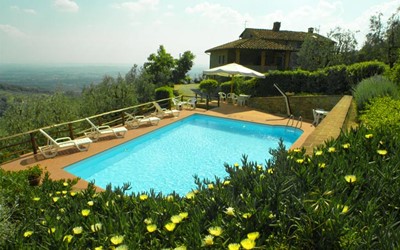 Santa Croce, Florence. Apartment, 1 Bedroom + Convertible Bed, 1 Bath (Sleeps 2-4 people) The accommodation is situated on the ground floor of an antique 16th century building. This apartment is within walking distance of Ponte Vecchio, Ponte alle Grazie, Santa Croce, and all points of interest. 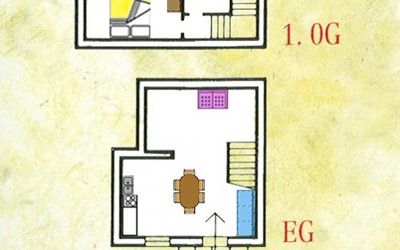 This apartment has been modified for people with mobility and disabled issues. It is located on the ground floor where there is a living room with fireplace, kitchen, two double bedrooms, two bathrooms with shower (one is for disabled people). There is also a nice covered patio terrace in front of the house, to eat outside.

Part of a farm estate located in Chianti, just thirty kilometres from Florence. Situated on a lovely small hill in the countryside. Surrounded by beautiful gardens and cypress trees. 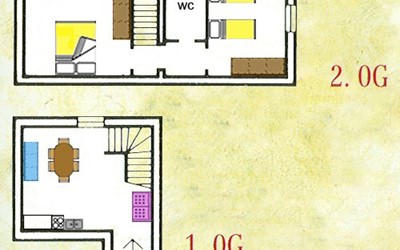 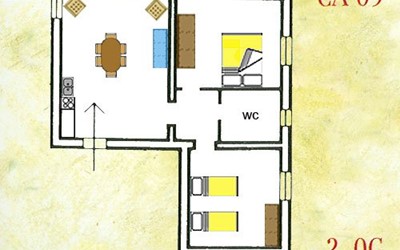 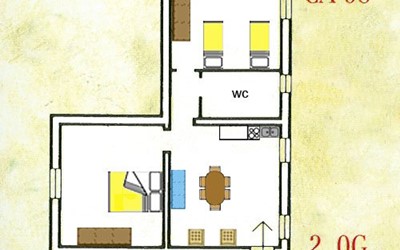 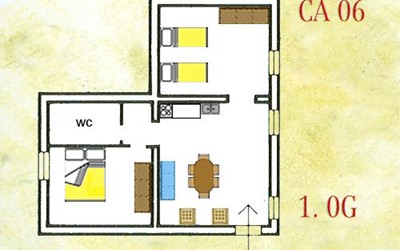 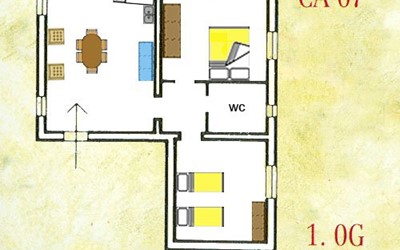 Air conditioned and centrally heated studio apartment central Florence in the Sant Ambrogio area. A former fifteenth century convent that has been recently renovated and furnished with antiques. 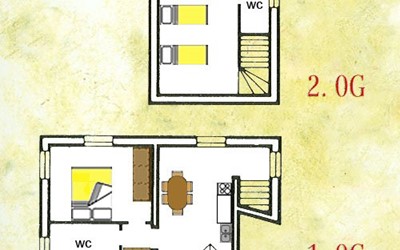 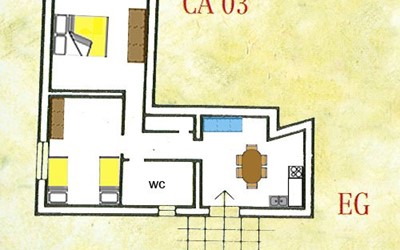 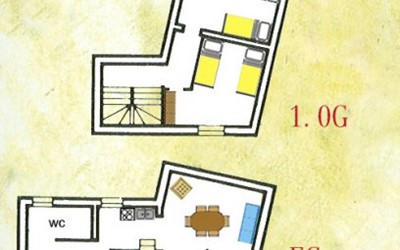 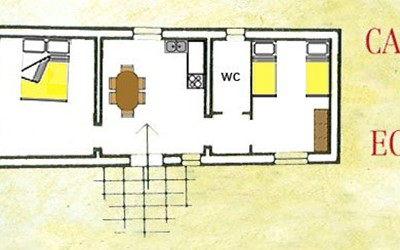 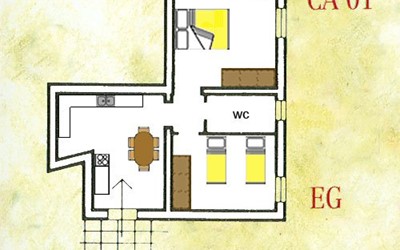 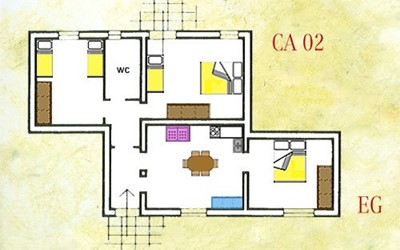 Florence apartments In the heart of the tuscan countryside, amid a stunning landscape of olive groves and vineyards, there lies a superb property "La Casaccia". It is in an ancient village of medieval origins, dating back from the XVIII century. Today, thanks to the recent conservative restoration, it has been turned into a touristic compound of 12 apartments, which are the true expression of the “Classic Tuscan style”: ceilings with wooden beams, florentine terracotta tiles for the floors and country-style furnishings. 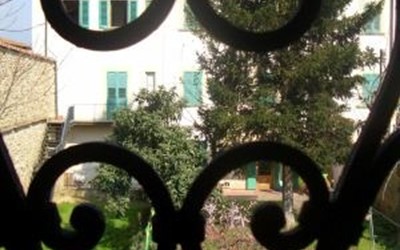 Florence apartments - An introduction to this wonderful property Historical tower building in part of the 14th century town walls of Figline Valdarno in Florence. Recently restored in the original style while at the same time taking into consideration the needs of modern living. Florence Apartments 2 bedroom 2 bathroom

Part of a farm estate located in Chianti, just thirty kilometres from Florence. Situated on a lovely small hill in the countryside. Surrounded by beautiful gardens and cypress trees.

Located in the Santa Croce part of central Florence. 2 Bedrooms, 2 Baths (Sleeps 4 people) Top quality roof top apartment in Florence, situated in the centre of the city between Santa Croce and Piazza Signoria. It has 2 large panoramic terraces offering fantastic views over Florence. The apartment is on the 4th floor (note 86 steps without an elevator) of a historical building which was home to the Embassy of the Duchy of Milan in the fifteenth century.

A very elegant property fitted with modern utilities and furniture, dressed with a few strategic antiques. The Apartment is in Santa Maria Novella central Florence. 3 Bedrooms + sofa Beds, 3 Bathrooms (Sleeps 6-9 people) with Lift access. Recently refurbished this period apartment is located on the top floor of a wonderful regal building with the benefit of a doorman in the via dei Fossi which is in the heart of Florence. 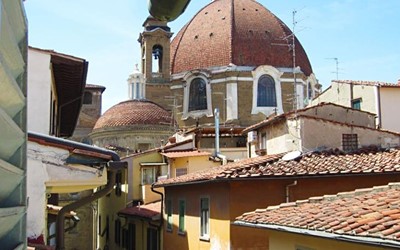 Typical Florentine styled apartment in Florence in the San Lorenzo area. Ideal for short or long term rentals. This apartment can accommodate up to 4 people, 1 bedroom and 1 bathroom with shower. 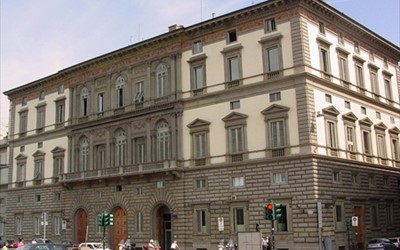 3 Bedrooms + Sofa beds, 2.5 Baths (Sleeps 6-8 people) Overlooking the famous Arno River In the centre of Florence, this spacious, elegant apartment faces over the river Arno and is one hundred meters from the Grand Hotel. The Duomo, Uffizi, and all the other main attractions are 10 minutes away by foot. The accommodation is on the 2nd floor of a 19th century palace, in the classic Florentine style. Its important to mention that there is an elevator to the accommodation. The views from most rooms includes the river Arno and the "Oltrarno" part of the city with also 600-year old cypresses. 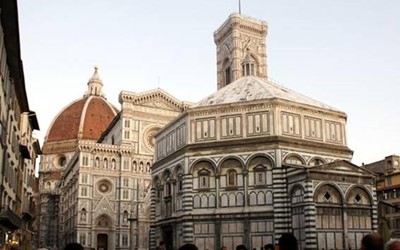 Modern and captivating apartment located in Florence in the Duomo area. It is ideal for short term rentals. It can sleep up to 4 people, has 1 bedroom and 2 full bathrooms.

A Country house that is converted into 3 apartments and sleeps up to 18 people. You can rent this as one accommodation or rent the individual apartments. Complete with Swimming pool . On request meal preparation for large groups. Baby cot and High chair available

Six kilometers from the historic center of Florence. Fantastic Views from the terrace including the famous Duomo and skyline. No need for a car as the bus is 100 meters away and you can relax by the swimming pool if you are not sightseeing!

A beautiful historical villa which dates back to the end of the 19th century. This charming property is quietly situated on the hills surrounding Florence, in the “Val di Sieve” region and enjoys extensive panoramic views over the Tuscan landscape. The outside areas are spacious (10000 square meters), well-kept and offers a beautiful private swimming-pool and a splendid Italian garden. The interiors are elegant and tastefully furnished with beautiful ancient pieces. This property is entirely fenced in and surrounded by luxuriant woods. The property caretakers live on the premises. 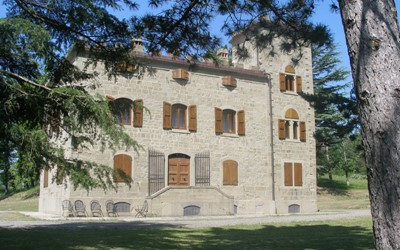 Villa Mazzini is a beautiful, elegant Tuscan villa surrounded by woods in the foothills of the Apennine mountains to the north of Florence its about 650 sq. m and is perfect for your holiday in Tuscany. The property is located a few kilometers to the north of Barberino di Mugello

Welcome to the glorious Villa Florentine in the heart of the Florentine Chianti hills which produces arguably some of the most famous wines in the world. The villa is located just 10 km from Florence, and is also close to Siena (70 km) and Arezzo (50 km). Totally surrounded by woods and green grasses with an enclosed garden of 3 hectares, complete with swimming pool of 25x12 meters and tennis courts with synthetic grass.

A large penthouse apartment with 5 bedrooms and 5 bathrooms. Situated in an ideal location close to the Ponte Vecchio and the Uffizi Gallery. Relax in style and enjoy the roof tops of Florence from your terrace!

This famous Bridge is the oldest in Florence, its first construction already existed before the 11th century but was destroyed by a flood of the river Arno. The bridge was rebuilt in solid stone in 1345. Now the bridge hosts mostly upmarket shops.

Palazzo Pitti
This palace was built for the banker Luca Pitti halfway through the fifteenth century. After he went bankrupt, the building became the Medici family residence. The family improved the building, starting with the large courtyard designed by Ammaniti. The Medici collected their Baroque and Renaissance art collections here, which can now be viewed in the Palatina Gallery. The Palace contains other important museums too: the gallery of Modern Art, the Silver Museum and the Costume Gallery.

Spedale degli Innocenti
This building was opened in 1445, and was the first orphanage in Europe. A part of the building is still used for this purpose today. The portico, built by Brunelleschi, is decorated with glazed terracotta spheres that represent new-born children. It is still possible to see the "wheel" in the portico, a turning stone cylinder where mothers placed their unwanted children, who were then turned round to the inside of the building.

Giardino di Boboli
The Boboli Gardens spread out alongside Palazzo Pitti. They were both created on the wishes of the Medici family in 1500. If you take a walk through the wonderful Renaissance gardens, you can see the magnificent monuments such as the amphitheater, the Grotta del Buontalenti, and the small island with the statues of the dancing country-folk.

SkypeCall us free on Skype 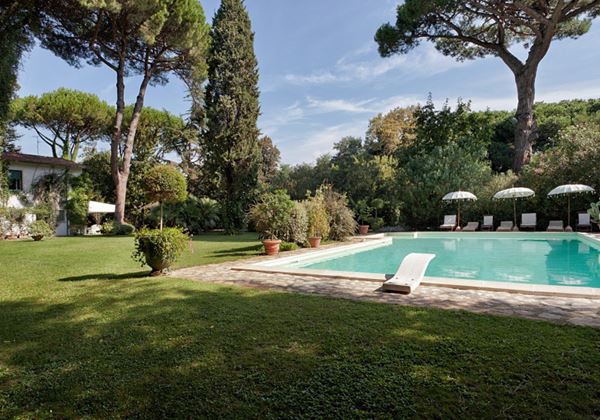 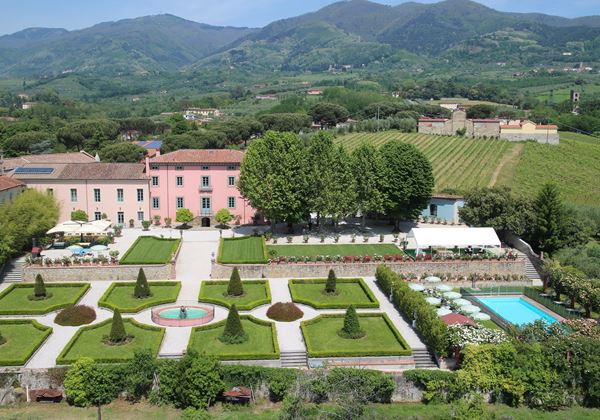 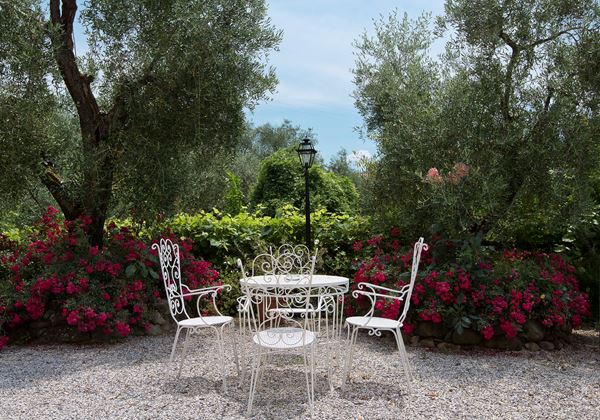